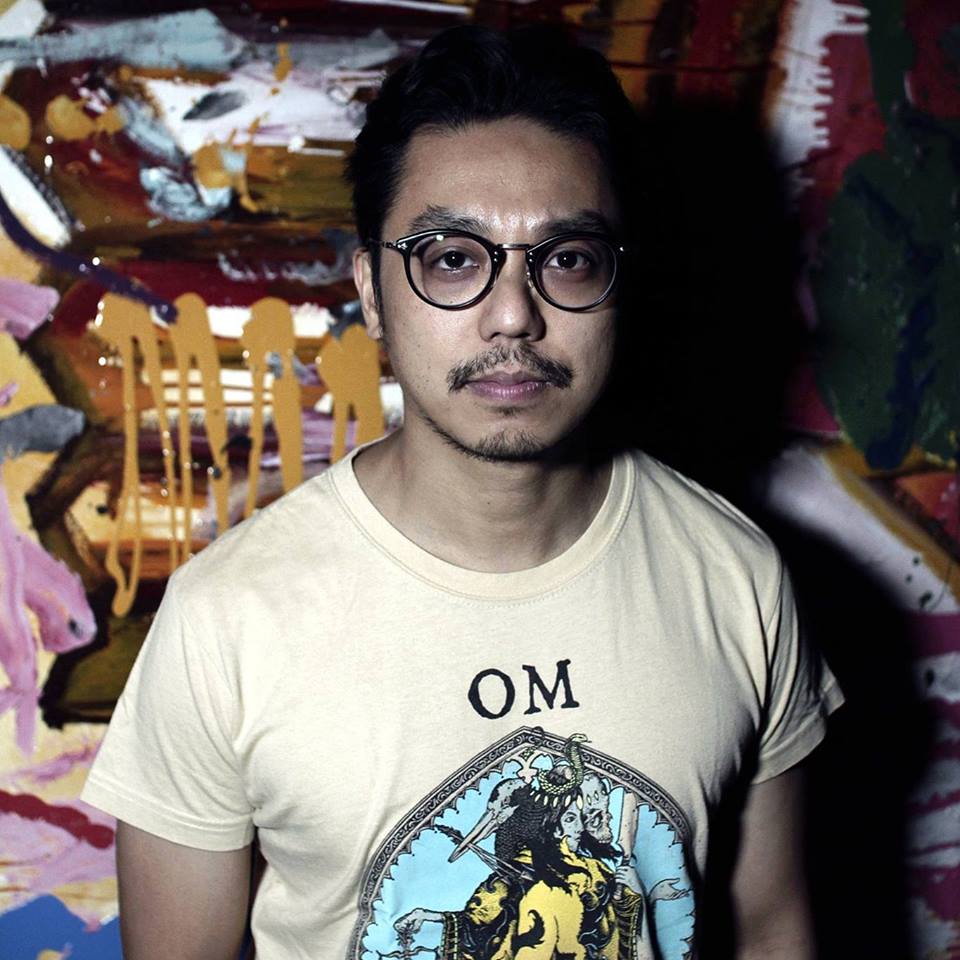 Ernest Concepcion (b. 1977) is a Filipino painter based in Manila, Philippines, who combines the motif of classical landscape with contemporary caricatures and representations that take one into the framework of warfare while uncovering the effects of a larger 20th-Century, Postwar existence. Concepcion began exploring this juxtaposition in a series of over 100 drawings from 2004 titled The Line Wars.  Within each 9 x 12-inch panel the artist covered the pictorial space with cartoon-like conflicts, portraying chairs flying toward each other, monster-like eggs smothering a massive army of Saint Benedicts, or pasta fighting against the quick-sands of rice.

In 2008 Concepcion’s vision of battlefield landscapes was realized on a much larger scale at the Kentler International Drawing Space where caricatures were tagged over landscapes and extended from floor to ceiling in the tall, narrow gallery space.  In 2009 the artist presented a series of explosion paintings that consisted of enamel on steel. Colors became the physical layers of each mushroom cloud and marked the artist’s shift further into the depths of conflicted horizon lines, away from caricatures.

A graduate of the University of the Philippines Bachelor of Fine Arts, Concepcion has produced a significant body of work with a particular interest in experimentation in the fields of painting, sculpture, and installation. In 2011 he was both a New York Foundation for the Arts (NYFA) finalist in the Drawing Category and a Nominee for the Joan Mitchell Foundation Painters and Sculptors Grant. In 2012, he re-established his connections with some prominent Manila art galleries where he had two solo exhibitions, in West Gallery and Blanc Gallery respectively, and participated in a number of major group exhibitions including an artist feature at The Lopez Memorial Museum. In 2013, he participated at El Museo del Barrio’s La Bienal in New York and had a solo exhibition in Minneapolis before returning back to Manila to exhibit at Art Informal, Secret Fresh, and 1335Mabini Gallery. In 2014 he became a Light & Space Contemporary resident artist and held his first-ever solo museum exhibition at the UP Vargas Museum showcasing entirely new epic-scale works that not only marked a momentous return home for the artist but also became his ultimate artistic epiphany. He was given the prestigious 13 Artists Award by the Cultural Center of the Philippines (CCP) in 2015. He divides his time as a full-time artist working between Manila and Brooklyn.

“Ernest Concepcion often works on large-scale canvases, creating crowded, action-packed, and paint-encrusted battlefields or strange lands with storied characters. Soldiers overlap on stained wildernesses. A solitary beast-man walks in a jungle — all of Concepcion’s paintings have something for us to decipher or clues to string into a narrative.

Concepcion himself is aware of his narrative style of painting or story-driven studio practice. And many of his works are brimming with a sense of conflict, of ruins, of storms, of the deluge, of invasions. It’s imagery and process that, according to Concepcion, resonates with a culture that feeds on the discord of its socio-political landscape. Inequality, unrest, disorder, and violence in our streets and halls of power seep into our popular culture. Meanwhile, hope is ushered in by our beliefs, the promises of faith, the mercy of the supernatural, or the confidence in one’s diligence and resourcefulness.

His imagery, however, is as much fed by what’s epic, sinister, heroic, gigantic, and otherworldly in the popular culture he consumes — comic books, toys, games, science fiction, and music. Salvation finds its equivalent in clues drawn in, a gallant cavalryman with an electric guitar, a mythical six-eyed wolf, a godlike mechanism, and lights in the distance.” – from Vintana.ph, 2020